What does WTH mean?

You know that many texting acronyms and text abbreviations were invented to replace cuss words and many inappropriate expressions, don’t you? Well, before asking ourselves “what does WTH mean”, we first need to understand that we have here the mild definition of the acronym. Of course, people never use the mild texting acronyms, or their meaning. So let’s see the Guess the Text answers, info and fun explanations and learn how to use texting acronyms in a polite manner!

You’re on level 94 reading the Guess the Text answers level 94 page. It’s time to put some champagne on ice, as you have only a handful of text abbreviations and you win the game! Now let’s march triumphantly towards the finish line, but not before learning what does WTH mean and how to use it!

Among all the text abbreviations and acronyms you’ll come across while chatting in Facebook, Twitting or IM-ing, the WTH acronym is the most frequently used, especially by teenagers or people who don’t want to curse. WTH usually stands for “what the hell”, but we agree that “what the heck” – as requested by the game – is the politically correct version.

WTH is used in such a large variety of contexts, some people need supplemental explanations, or at least some tone of voice or gestures to accompany the text. It is used to express surprise, confusion, anger and even happiness, but everything is contextual. Sometimes people use it to ask “why the heck” instead of “what the heck.”

WTH – What the Heck 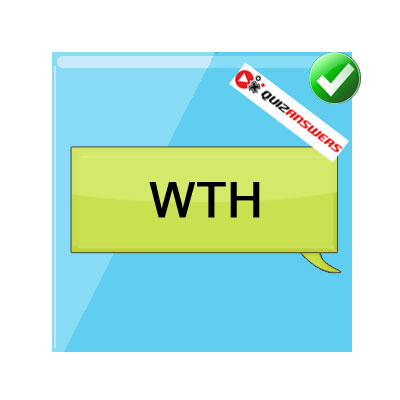