What does IDK mean?

What does IDK mean, you ask? Well, that’s ironic, isn’t it? If you didn’t catch the pun, that’s alright, as the Guess the Text answers for this level are not meant to confuse you even more, but clear things up. If you’re stuck at this level, you shouldn’t worry: as usual, we have the text acronym fully explained right here on this page.

All text abbreviations have logic behind, even if some of them seem to be completely randomly built. Usually, they use the first letter of the words making an idiom or a phrase, but if you looked at something weird and asked yourself what does this mean in texting, you know what we mean. So let’s get out of the dark, see what does IDK mean and have some fun!

According to the The American Heritage® Abbreviations Dictionary, Third Edition (2005), IDK is the abbreviation for “I don’t know.” Even if it made its official entry in dictionaries around 2005, IDK has been in use since the 2000s.

If you are curious enough to engage in some Internet slang research, you’ll find out that many people were still having problems with IDK and other slang texts by 2008, which means that some abbreviations were more frequently used than others. 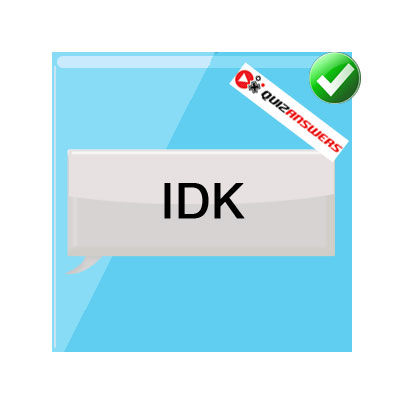